Battery-powered lawn mowers have come a long way to be a viable alternative to their gas-powered counterparts. Lithium-ion batteries, which are typically used to power these machines, are able to be charged quickly, have a high capacity, and are capable of putting out a lot more power than older style power tool batteries, and as a result, they’re able to power a lawn mower.

In most cases, push mowers that are powered by a batter will have at least some charge in them when they leave the factory, though this isn’t always the case.

One of the biggest benefits of modern lithium-ion batteries, however, are their extremely fast charge time. Read on to find out all about lawn mower batteries!

Do New Lawn Mower Batteries Need to Be Charged?

If you purchase a new push mower that’s equipped with a battery, you can expect the battery to have at least enough charge to get it started and mow a small patch of grass.

It may not be fully charged, especially if it’s been some time since it came from the factory. Of course, there’s always the chance that it has no charge in it.

Your riding mower should have a charge when you take ownership of it. Even though it can lose its charge after two or four weeks of going without a start, the store you purchase it from should be running it from time to time.

If you buy a riding mower that has a dead battery the first time you purchase it, you should reach out to the seller or manufacturer.

What Sort of Battery is in a Lawn Mower?

The battery that’s in a lawn mower depends on the type of lawn mower. Push mowers that run on batteries typically have a Li-Ion battery of varying voltages, and is made by the same manufacturer as makes the rest of the mower.

Riding mowers have a 12-volt battery that’s similar to the ones found in cars, albeit on a smaller scale.

As recently as a decade ago, running a lawn mower with a battery was possible but not very practical. Lawn mowers require a lot more power than common hand tools to spin the blades quickly enough to take down thick grass.

Before lithium-ion batteries (Li-ion for short) became cheap enough for homeowners to purchase, the standard battery for power tools was either Nickel-Metal Hydride (NiMH) or Nickel-Cadmium (NiCD), both of which were rechargeable and could provide enough power to run a power tool.

However, NiMH and NiCD batteries have a number of issues that make them unsuitable for lawn mowers in particular. Among these issues are:

This means mowing an acre of land might take several hours because you would have to wait for the battery to charge several times while mowing, or else have replacement batteries.

An NiCD battery that put out enough power for a lawn mower would also likely be very large. However, Li-Ion batteries hold a lot of power in a small space and are able to be charged very quickly.

This means that the top of the line push mowers with Li-Ion batteries are able to cut over a quarter acre on one single charge.

Another cool feature of many modern battery-powered push mowers is the fact that they vary the amount of power drawn based on the grass resistance.

Therefore, different areas of your lawn may require different power outputs. This feature extends battery life and allows you to cut larger areas on a single charge.

Riding mowers are powered by large 12-volt, lead-acid batteries like those found in your automobile. These batteries are solely intended to start the mower’s engine.

When these batteries are brand-new, they don’t need to be charged at all, and running the engine helps build back up the charge that’s used in starting the machine. However, 12-volt batteries do lose charge as they age, and they become less able to hold a charge as well.

If your riding mower won’t start and you have to jump it constantly, you may have to replace the battery.

How Do You Take Care of a Li-Ion Battery?

Li-Ion batteries have a number of considerations to extend the battery life. Unlike NiCD or NiMH batteries, you don’t need to fully deplete them before recharging.

However, you shouldn’t overcharge the battery, as this will shorten its life. Li-Ion batteries can hold a charge for months, so that isn’t something to worry about either. In general, you should charge Li-Ion batteries as soon as you’re done with them, being careful to remove them from the charger as soon as they’re charged.

Some of the newer batteries out there have chargers that prevent overcharging, but you should always check the user manual to make sure that this is the case.

Do You Ever Have to Jump-start a Riding Mower Battery?

Anyone with a car has likely had to jump start their battery at least once in their life. The same is true for a riding mower, which has a similar engine to (albeit a much smaller one) and the same kind of battery as a car.

The battery in a riding mower is part of the ignition system, which helps to get the engine started. However, there are a number of reasons your riding mower battery may be draining:

Having to jump-start a riding mower can be an annoying hassle, especially if you store it in a place where you can’t get your car to.

If you want to learn more about jump starting or charging a lawn mower, check out this article I wrote about this subject.

When you purchase a new battery-powered lawn mower, the battery inside likely has at least some charge on it. Li-Ion batteries can hold a charge for months at a time, so as long as the manufacturer charged it before it went in the box, you’re probably good to go.

However, you may open it up and find that you need to stick it on its charger for a short time to mow your lawn; luckily it won’t be a long wait.

If your new riding mower battery needs a charge, on the other hand, you should reach out to the store you purchased it from or the manufacturer for help.

These 12-volt lead acid batteries should work when you purchase them, so if they aren’t working, you probably want to try and get a replacement one. A battery experiencing those sorts of issues right out of the box will probably give you a lot of trouble down the road. 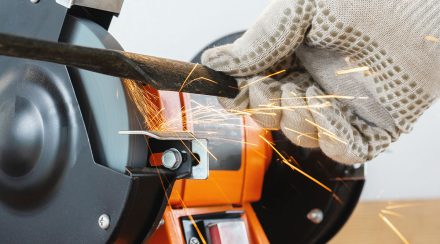 Are Lawnmower Blades Supposed to Be Sharp?
Categories: Lawn mowers 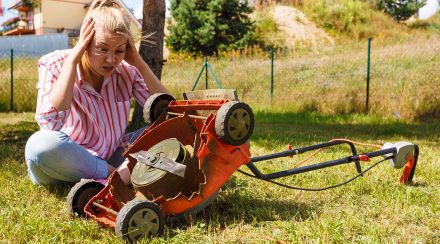 Here’s How to Tell Which Side of the Lawn Mower Blade is Up
Categories: Lawn mowers 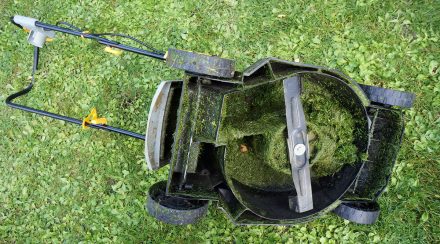