There are only a few things that riding lawnmowers and standard vehicles have in common, one of which being the use of a battery to start up and run. So, if you happen to have a lawnmower with a dead battery and only a car battery charger nearby, can you, and should you, use it to charge it?

This is definitely a process that you can carry out within the boundaries of your own home without the need of professional help. However, there are some precautions you must take to avoid causing any damage to your lawnmower or your surroundings.

Why Do Lawn Mowers Run Out of Battery?

Everything eventually runs out of battery power. However, many cars and lawnmowers use gasoline to keep running and have a mechanism in place that will keep recharging the battery as long as it is functional. Therefore, you might be wondering: Why did my battery run out when I wasn’t even using the mower?

The answer to this question is usually cold weather. Lawnmowers use lead batteries, which are known to slowly discharge under cold temperatures. Therefore, if you are facing this problem in the spring, it was most likely the freezing temperatures of the winter that caused the problem, and this is entirely normal.

If your battery is damaged or you know that something besides the battery is wrong with your lawnmower, don’t hesitate to contact a professional; handling lead batteries can be dangerous.

However, you are most likely reading this article because your battery is already discharged, and you are looking for a way to bring it back to life using your car battery charger, so let’s get right into it.

Battery chargers have been around for a while now. A few years back, they had the major flaw of not being capable of detecting and avoiding overcharging a battery. However, battery charger technology has made that a problem of the past, and you can now safely use them to recharge batteries of different types, including that of a lawnmower.

If you don’t have a battery charger at home, or just want to upgrade to a newer model, you can buy one on Amazon.

The process of using a car battery charger to charge a lawnmower’s battery is simple:

This method is a pretty good alternative for charging a dead lawnmower since it is efficient. The battery charger even has multiple fail-safes in place to protect you against any accidents that may occur due to the battery overcharging.

A word of caution: Do not do anything outside of what is mentioned in the steps above and be careful with where you connect the jumper cables. The charger may have multiple fail-safes, but you don’t want to find out how far they will go when it comes to avoiding accidents.

If you don’t happen to have a car battery charger at your disposal or you are not able to purchase one, there is another method that you can try: using your vehicle’s battery itself.

Note that this alternative will not effectively charge your mower’s battery to its full capacity, but should give it enough of a boost to start it up and move it where you need to. In addition, this method will only work on mowers with 12-volt batteries.

This process is pretty simple and straightforward and works similarly to how you would jump a car using jumper cables attached to another vehicle’s battery:

Check out this video to see how it’s done:

It is essential that you disconnect the lawnmower from the car as soon as possible rather than leaving them connected for longer than needed since this could overcharge the battery and result in an accident.

What to Do if Your Battery Won’t Charge

If you find that your battery will not jump or charge, chances are you can still bring it back to life. Check out this website if you want to learn how!

Charging your mower’s battery using a car battery charger is possible as long as your battery is in good shape and is 12-volts. A battery charger will make the process much more straightforward and safer for you since it is specifically designed to revive batteries.

If you do not have a car battery charger on hand, but a pair of jumper cables are available, then there is an alternative charge method that is just as efficient, which is using your car’s battery.

However, this solution only works to give your mower enough power to start up and drive it to a desired spot in the yard. It is not intended to provide your battery with a full charge, and doing so repeatedly could cause your battery to wear down faster. 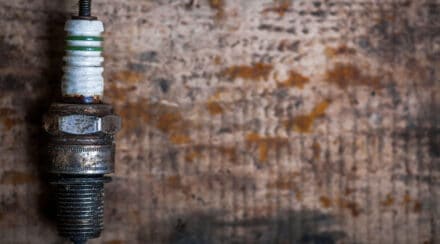 Here’s What to Do If Your Lawn Mower Battery Is Dead
Categories: Lawn mowers