If you have gas-powered equipment and power tools at home, you know that there are some peculiarities that you need to be very careful about.

Like, how a two-stroke engine should always take mixed gas. Doing otherwise is a big no-no. That also means that you need to mix it before you pour it into the fuel tank.

And to make matters worse, mixed gas should not be left to sit unattended for long periods of time. So what happens if you just end up with too much mixed-gas on your hands?

Can you use the mixed gas with your tools that have a four-stroke engine?

Fortunately, things are not that complicated.

Below I get into more detail about what you need to know about mixed gas and how good of an idea it is to use it with a four-stroke engine.

There are two main types of engines: a two-stroke and a four-stroke engine.

Two-stroke engines take premixed oil. You can easily distinguish them by the fact that they have just one fuel tank, which is usually marked that it takes fuel and oil on the cap. The fuel and oil need to be mixed before they are poured into the fuel tank. There are also specific oil to fuel ratios that have to be followed.

On a four-stroke engine, the gas and oil do not premix. There are two separate tanks for fuel and oil; each marked accordingly.

Before we get into that, we need to go through how the two types of engines actually work.

How Does a Two-Stroke Engine Work?

Two-stroke engines are primarily used for small applications, although there are some exceptions.

It is important to note that a two-stroke engine fires once for every two movements of the piston or every one revolution of the crankshaft.

How Does a Four-Stroke Engine Work?

A four-stroke engine is a bit more complicated. It goes through four different strokes or cycles.

Unlike the two-stroke engine, a four-stroke engine combusts once every four movements of the piston or for every two revolutions of the crankshaft.

The unique thing about two-stroke engines is that you will have the fuel and air inside the crankcase where the crankshaft is located.

Because of that, you need to put oil in the fuel to lubricate the moving parts of the crankshaft. Failing to do so, you are risking damaging the piston and the crankshaft.

Why Does a Four-Stroke Engine Not Need Mixed Gas?

A four-stroke engine does have a crankcase and a crankshaft as well, but why does it not need mixed gas?

What you will find inside the crankcase of a four-stroke engine is only oil and no fuel. The fuel is sprayed directly into the cylinder.

This provides for better lubrication of the crankshaft, removing any need for oil to be present in the fuel.

If you add mixed fuel to your four-stroke engine, it will start to smoke a lot.

It could potentially damage your four-stroke engine if you use mixed fuel in large quantities. The chances of a problem occurring are significantly lowered if you use small amounts of the mixed gas and mix it in with the standard gas. That way, it will be more diluted.

The problem stems from the fact that the cylinder of a four-stroke engine is not designed to have any oil in it. This may not necessarily damage them but the oil can leave residue and foul the plug if there is oil in large quantities.

Conversely, many car racers actually add clean two-stroke oil to their fuel for extra lubrication so that the engine runs as smoothly as possible, lowering the friction. Some people also believe that it improves their MPG.

Additionally, engines are not designed to work only with the best and most perfect fuel. That is simply not the case as there are different types of fuel and fuel quality.

So overall mixed gas and even oil in small quantities will not necessarily damage a four-stroke engine in any way. Things are however, very different when it comes to adding four-stroke fuel to a two-stroke engine.

If you try using clean fuel with a two-stroke engine, you are risking damaging it beyond repair. This can happen in the span of a few minutes, so it should be avoided at all costs.

What to Do with Your Leftover Mixed Gas?

If you have a weed eater or some other equipment and tools that take mixed gas, you may end up having large amounts of mixed gas that you will not be able to utilize.

Letting the fuel sit is actually going to degrade it, rendering it unsuitable for later use.

One of the first things, especially if you don’t want to risk it, is to add fuel stabilizer to your mixed fuel before adding it to the fuel tank. That way, you will get rid of any problems associated with old fuel.

And depending on how often you will be using your mixed gas, you might not run into any problems at all.

On the other hand, a four-stroke engine can take and use two-stroke fuel, but it needs to be in very low quantities compared to the rest of the fuel.

It is not recommended to use more than half of a gallon of mixed fuel per ten gallons of standard fuel.

The lawn equipment (like tillers, trimmers, etc.) have smaller engines, which are typically two-stroke.

Some data even suggests that running a lawnmower for one hour can be as harmful to the environment as 40 cars.

As a result of that, there has been a strong push from the authorities to move on to cleaner alternatives, which is the electric and battery-powered equipment.

And there is more to it. Two-stroke engines can become very expensive in the long run. Oil is not cheap, and mixing it with your fuel every time you are going to be using your tools ends up being very costly.

As a result, two-stroke engines are being gradually phased out (at least where it makes sense), and they are being replaced by cleaner and cheaper solutions. 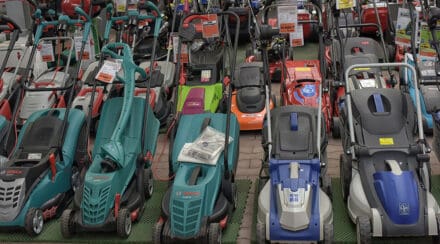 How Much Does a Lawn Mower Cost?
Categories: Lawn mowers 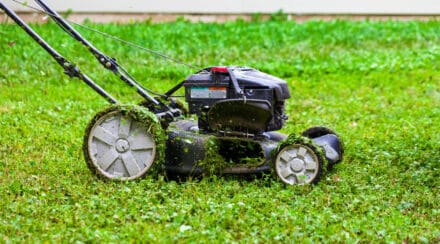 Can You Put a Mulching Blade on Any Mower?
Categories: Lawn mowers 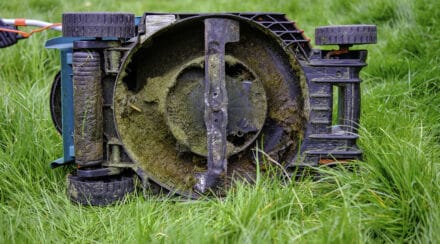 What Lawn Mower Blade Do I Need?
Categories: Lawn mowers