Universal components for power tools such as chainsaws are a modern-day luxury since they allow tool users to swap accessories and auxiliary parts off a power tool easily.

This not only allows for more accessible replacement parts, but it also saves the tool owner the expense of replacing the tool entirely if a single component breaks.

If you use a chainsaw often, it is essential to know more about the steps you should take when it comes time to replace your chainsaw bar.

Keep reading to learn more about why chainsaws are not universal and how to choose a chainsaw bar for your chainsaw.

Chainsaw Bars Are Not Universal

As convenient as it would be, chainsaw bars aren’t universal at all. Even if you like the chainsaw bar on another chainsaw and can find it as a replacement component on its own, there’s no guarantee that it will work correctly with the shape of your machine unless it is the same model.

Some people may be able to use a chainsaw bar on a chainsaw that it isn’t made for, but this is the rare exception that proves the rule.

There are a few things that you need to look at when you’re trying to replace your chainsaw bar. These include the following:

If these three aspects match, you can put the new bar on your chainsaw. After the new chainsaw has been installed, be sure that everything fits soundly before testing the chainsaw to see how well everything works.

There are a few different types of chainsaw bars available. Usually, if you’re replacing a chainsaw bar on your chainsaw, the new bar will be one out of the same category as the old.

A solid chainsaw bar is made from one solid piece of steel. These are the most durable types and often the best for consistent work that doesn’t require a lot of flexibility.

Among the solid chainsaw bars, there are two smaller categories:

Here are a couple of examples of high-quality replaceable sprocket nose bars:

If you would prefer a hard nose bar, here are a couple of options:

The replaceable sprocket nose bar is considered by many to be more cost-effective because, often, you only need to replace the sprocket rather than the entire bar.

However, they are not as sturdy as the hard nose bars.

Hard nose bars are the better choice for jobs where you need to use the nose of the bar to saw through something.

These bars tend to be expensive and can consume some of the power of the chainsaw because they tend to overheat.

In contrast to a solid chainsaw bar, a laminated chainsaw bar includes two steel rails that are joined by a steel core with a sprocket in between.

Here are a few examples of high-quality laminated chainsaw bars (some include the chain as well):

While the solid bars are significantly more durable, the laminated bars are more flexible.

Either of these could be an excellent choice for you, depending on your project and your preferences. You should also remember that laminated chainsaw bars are typically shorter than solid bars. The longest laminated bars you will find will be 24 inches long.

Why are Chainsaw Bars NOT Universal?

The short answer to this question is that the design of chainsaws varies wildly from saw to saw. When chainsaws were first invented in 1830, the design of the chainsaw was very simplistic.

In 2020, these chainsaws are a very sophisticated pieces of machinery with several mechanical bells and whistles attached to go along with the cutting action.

Since their inception, hundreds of chainsaw companies have begun manufacturing them, and none of these companies follow the same engineering standards or specifications.

Instead, it is in the best interest of the company to include design aspects that make their chainsaws exceptional among its many competitors.

The same unique non-standard parts that make a chainsaw special, however, also make those same components more difficult to replace.

There is also another business factor to consider in making components non-universal, too. If a chainsaw manufacturer makes a specific kind of chainsaw, they only want their customers to buy replacement parts from them, not from a cheaper company.

This both ensures that the part will work as intended with the company’s chainsaw with no liability issues and keeps the customer coming back to the parent company for return purchases.

Many people think that a chainsaw is a very simple instrument. However, there are many different types of chainsaws and a great deal of variety in the bars that you can attach to them.

Therefore, it’s essential to make sure that a particular chainsaw bar is compatible with your machine, rather than making an assumption and ending up unable to use your chainsaw.

This is also an example of why it is a good idea to learn about chainsaws and their components in general, rather than thinking all you need to do is learn how to use your particular chainsaw.

In situations where you have to replace parts, you should know a bit about how the parts function together to be able to make the most informed purchase. 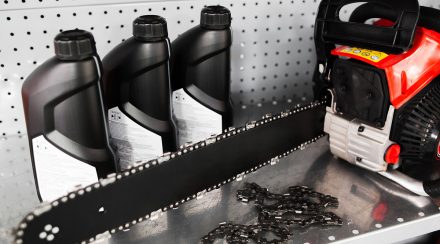 What Chainsaw Bar Oil to Use – My Top 5 Recommendations
Categories: Chainsaws 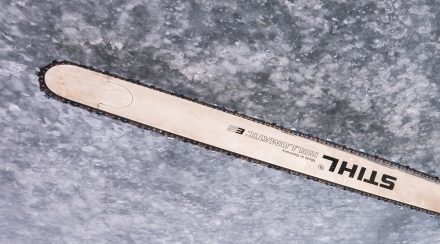 Here’s Why They Turn Chainsaw Bars Upside Down
Categories: Chainsaws 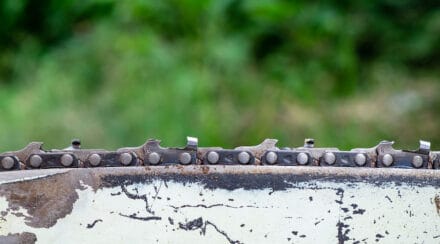 When to Replace a Chainsaw’s Bar – 8 Signs to Look Out For
Categories: Chainsaws